On the naughty step: The unacceptable face of London landlords

Some of you, those in London at least, might have noticed Boris Johnson announce a new, and completely voluntary, no compulsion here, landlord accreditation scheme. The idea being that tenants, desperate to find somewhere in the middle of the worst accommodation shortage in London for many, many years, will choose to avoid a ‘non-Boris’ landlord. This is of dubious worth, but no matter, what concerns us here is what followed that announcement. Bear with me, because it is worth it in the end.

At the next London Assembly Questions to Boris session, Andrew Dismore, Labour Assembly member for Barnet and Camden (oh yes, Barnet), wanted to ask Boris about the conduct of a particular landlord in his constituency.

Footage of him putting the question is on the Broken Barnet blog, but the detail is as follows. Italics are the substance of AD’s extended question.

The landlord in question has 15 properties in his and his wife’s name and 4 via a company [S&H Housing Ltd- NL]. Mr Dismore had spoken to seven of the tenants, 6 of whom were on housing benefit (LHA).

So far, so standard. A private landlord artificially inflating rents to profit from LHA rates where they exceed actual market rents, profiting hugely from public funds. Distasteful, and inflating the housing benefit bill, but not unlawful. But there is more.

The assured short hold tenancy agreements seen by AD were for a 12 months term and “permitted rent increases of any amount at any time during the tenancy” – Shelter were quoted by AD as responding “we would almost certainly classify this as an unfair term and probably illegal”.

Well, Shelter were holding back a bit. It is definitely an unfair term and definitely unlawful. There are statutory mechanisms by which rent can be raised in the course of an AST, or a clear, fixed rent review mechanism in the tenancy agreement.  Can’t be lawfully done otherwise.

One of the tenants, a tenant of the landlord for 12 years, said that the living room had been partitioned with a flimsy partition to create a ‘fourth bedroom’. The landlord showed up at her door unannounced late at night asking her to sign a new tenancy agreement. She was only shown the last page, with the place for her signature. The most recent agreement had the ‘witness’ signature pre-signed, though she never saw the witness. The landlord often turned up without notice to discuss rent payments at other times. As the rent had been increased over LHA rates for a 4 bed (and despite the local market rent being some £800 per month lower), the landlord allegedly told the tenant about DHPs and said he would make arrangements for her to go to Barnet Council to ask for DHP.

LHA was cut due to the benefit cap. DHP made up the cut, temporarily. Allegedly the landlord later informally accepted the reduced LHA amount as the rent, but insisted upon the outstanding arrears arising from the cap.

So, we have the dodgy  but widespread ‘sub division’ of properties to create an extra bedroom, regardless of habitability. We have attempt to pressure a signature on a new tenancy without time for it to be read. We have, at the least, breach of quiet enjoyment in turning up without notice, let alone late in the evening. We have ‘pre-signed’ witnesses – not that a witness is actually required to a 12 month AST at all, but if you are going to sign as a witness, you have to, well, witness the thing you are signing as a witness to. And then we have to attempt to squeeze still more out of public funds via DHP. Some of these are breaches of tenancy agreement, some might possibly amount to harassment, some are simply distastefully exploitative. And suborning a fake witness signature, thus forging a witnessed document? Hmmm.

When DHP stopped, the landlord then allegedly used those arrears as grounds for possession, also allegedly deducting the equivalent of the stopped DHP from the deposit on the tenant’s eviction.

No, of course not, replies Boris. Sounds a terrible case and as if the landlord has broken the law, or committed misrepresentation of the terms of the lease. Boris would be happy to help vindicate the rights of that tenant. Concealing element of the tenancy agreement when trying to get the tenant to sign, it seemed to Boris, would be prima facie illegal.

And then, albeit with all the panache of an end of pier conjurer, a lifetime of unfulfillingly pulling rabbits from dingy hats behind him and only a cold bed in a seaside B&B to look forward to, Mr Dismore performs the reveal. Who was this landlord, and who the pre-signed witness?

The landlord was Councillor Hugh Rayner, the new (as of 2 June) Tory Mayor of Barnet.

Mayor Rayner, on the other hand, he of the unlawful tenancy agreement clauses allowing for unlawful rent increases, and of the unlawful breach of quiet enjoyment type unannounced visits, deserves a little more attention. Here he is, radiating dignity on his first council meeting as Mayor. 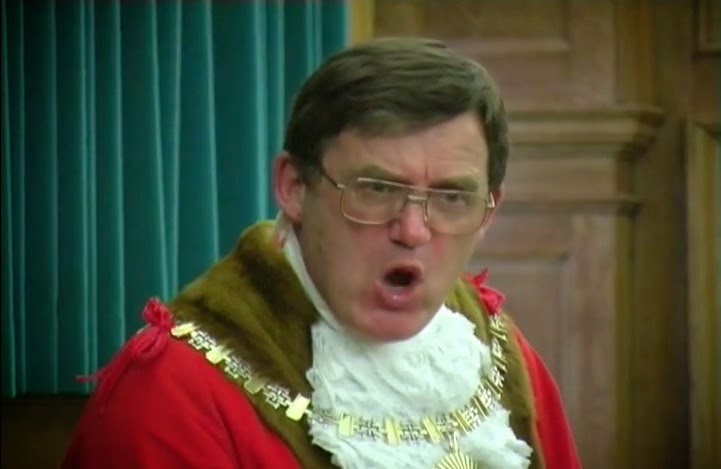 Mayor Rayner (not demanding an unlawful tenancy agreement is signed at this point, but still the unacceptable face of London landlords).

He claims to have removed the clause about raising rent earlier this year as he now “appreciates they are non-enforceable”, but not could answer when the change took place.

And he no longer asks witnesses to pre-sign contracts – he admitted he admitted it was done on various occasions to “save time and trouble” but now appreciates it is incorrect.

He added that rent renewals or discussions about arrears are dealt with at the tenants home, and where possible, an appointment is made.

But when asked whether he felt 10pm was an unreasonable time to visit a tenant, he replied: “If they say it’s inconvenient for them, I go away. I take the tenants judgement.

“No pressure is applied.

“Efforts are made to have an English speaker available to translate – often the tenants children.”

He, could not, however, elaborate on the age of the children and said he does not feel this to be inappropriate.

He added: “With regards to charging above market rates, when letting to housing benefit funded tenants, our rents have been in line with the prevailing local housing allowance rates.”

So, not only a confession to an unlawful rent increase clause and ‘pre-signed’ witness signatures, but also a confession to turning up at tenants’ properties without notice (‘where possible an appointment is made’). He then adds in relying on the tenants’ children to translate a legal document where the tenant does not speak or read english adequately. To be fair, sometimes the children may be over 18, but somehow I doubt this is ‘often’ the case. And then of course the rents are in line with (the very top rate of) LHA rather than the market rent for such properties per se.

As even a cursory glance at the DCLG’s shiny new helpful ‘tenancy checklist‘ leaflet would have informed Mayor Rayner, he is really a little bit of a rogue landlord, letting down the Government and, as the DWP keep telling us about the HB bill, letting the taxpayer down, terribly.

And to add insult to injury for Boris:

Cllr Rayner said he “never thought it was necessary” to join the accreditation board but that he would look into it based on our story.

Well, no Mayor Rayner. It isn’t necessary. And Boris has made sure it still isn’t, though I’m fairly sure he won’t be very pleased with you right now. On the other hand, not actually doing unlawful things like turning up without notice and having unlawful tenancy agreement clauses is necessary, down to it being the law.

So, that is Mayor Rayner, a experienced landlord of over 12 years, who controls some 19 properties, yet who only realised ‘earlier this year’ that his tenancy agreements were unlawful, and who still doesn’t realise that he cannot turn up at the tenants’ property without notice without breaching the tenants’ rights to quiet enjoyment. A councillor, and Mayor, who suborned false witness signatures from another councillor, because ‘it saved time and trouble’. And a landlord who relies on the tenant’s children to translate legal documents, because this is not ‘inappropriate’. Onto the naughty step he goes.

As something of a rogue landlord and LHA exploiter, and one who clearly had no interest in or even knowledge of Boris’s great London Rental accreditation scheme, I suspect Mayor Rayner has just lost friends in the Mayoralty.  Oh how quick is the arc of a political career…

[Update. 13/06/14. It appears from this article in the local paper that Mr Rayner may actually have purported to exercise the ‘raise the rent without notice whenever I like’ clause in the tenancy agreements. If so, these rent increases would be unlawful. The question for Mr Rayner is did this happen and if so, when and by how much was the rent increased in this way? And then what is he going to do about the additional ‘rent’ received following such hikes, if any?

Did Mr Rayner pass on any such unlawful increases to the Council LHA department?

On the face of it, any tenants who had had such a hike could claim the payments back. And if the hikes had given rise to arrears then relied upon in possession proceedings? Hmmm.]

Posted in: Assured Shorthold tenancy | Benefits | Housing law - All
NL is the former soubriquet of the founder of the blog. NL Redux is the author of certain kinds of, non-housing related, posts...
← The state of that bedroom Former landlords and s.20B LTA 1985 →