A triplet of brief notes.

Zipporah Lisle-Mainwaring won a judicial review of the Magistrates and Crown Court decisions upholding RB Kensington & Chelsea’s Notice under s.215 Town and County Planning Act 1990, ordering her to paint her Kensington property white, to cover the stripes that may or may not have been painted on the exterior following neighbours bringing a judicial review of her planning permission to demolish and redevelop the site. 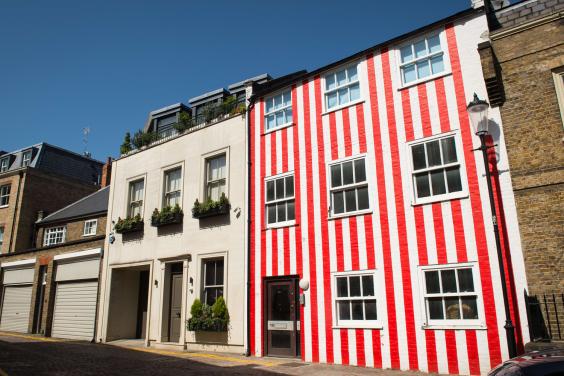 RBKC had argued (and the Mags and Crown Court agreed) that the stripes amounted to a ‘condition of the land’ which caused ‘an adverse effect on amenity’ for the neighbouring land.

Gilbart J pointed out that the painting was lawful, and that matters of aesthetics were outwith the TCPA (and also the remit of the Magistrates and Crown Court).

Firstly, I have noted the Crown Court’s finding that the Claimant painted the house in stripes as a matter of pique. She may well have done, but s 215 does not entitle one to address the motive of a landowner. A garish (to use the judge’s phrase) colour scheme may have come about because of an owner’s eccentricity or because of his /her pique. The section does not apply any differently to the latter than it does to the former. Secondly, the effect of upholding this Notice will be to give a LPA power to cause buildings to be removed, altered or repainted because the LPA (and Magistrates’ or Crown Court on appeal) dislikes the appearance thus created, on grounds that relate only to aesthetics.

RBKC did have powers under the planning code, but hadn’t used them – and those would require compensation to the landowner.

Ms Lisle-Mainwaring, we should also note, recently won libel damages of £54,000 from the Daly Mail for its reporting of the Stripes Dispute. She also failed in a judicial review of RBKC’s newly restrictive planning policy on basement developments, and of course won in the House of Lords on proprietary estoppel, but lost on unjust enrichment in  Yeomans Row v Cobbe (2008) UKHL 55. Ms Lisle-Mainwaring’s ongoing support of the legal profession is to be applauded.

Meanwhile, one of the legal profession not to be applauded is a partner in Wembley firm Gurusinghe & Co. Suhasini Gurusinghe was found guilty of failing to licence an HMO, and failures to maintain the property, fire safety failures, failure to provide electrical and gas safety certificates. The result was a £10,000 fine, £2,000 costs and £170 victim surcharge.

The property had 6 tenants, each paying £300-£550 per month. It also had a kitchen in a garden shed. Council officers found the

ramshackle kitchen was in danger of  collapse — and that electricity was set up using leads from the house which was “in danger of catching fire” due to the proximity of gas canisters.

a broken front door and no fire safety measures or certificates for gas and electricity.

Gurushinge, somewhat awkwardly, has a Law Society entry that proclaims her expertise in Landlord and Tenant – Residential

Despite this, her defence was a)  ‘I didn’t get the licence renewal letters’ – claiming that the council had sent  licence renewal letters to the wrong address, and b) a tenant had set up the kitchen without her knowledge. Ms Gurushinge said it was “a very unfortunate situation” and that “I feel very hard done by”. The Magistrates were apparently less than convinced by these excuses.

And last, and fairly firmly in the ‘What the hell!’ category, comes another story involving Camelot – the property guardian business – and again from Bristol.

Bear with me. It seems that Brentry Elderly People’s Home – a closed care home – had been somehow licensed or handed over to Camelot Property Management Ltd (one of various Camelot companies, which is now in voluntary liquidation, by the way). Camelot had in turn entered some kind of agreement with a bus driver agency, ‘Meridian Drivers’ for the property to be used as accommodation for agency drivers and cleaners, then apparently, possibly, working for First Bus in Bristol.

But, it appears, there were discovered to be some 40 people, drivers and cleaners, living in the property. This was reported to the council, who have in turn reported it to the police as an allegation of ‘modern slavery’. The council lead for housing is reported as saying

the council wanted the building back but there was a ‘big issue’ with the situation there. “We’ve reported the situation to the police,” he confirmed. “Some people were living in conditions that there was a complaint about, and the complaint amounted to an allegation of modern slavery, which is a matter for the police, not the council. We’re not the people to investigate that.

“We’re told they are massively over-occupying the building.

“We’re not at all happy about that many people there. We think there’s about 40 people there. This is not what the property guardians scheme is about, it’s supposed to be about security for a building, not to create a housing situation like this,” he added.

We will see if more details emerge, but if Camelot are subletting to employment agencies as accommodation for temporary staff, a whole new world of potential legal pain opens up for them (though not Camelot Property Management, because, well, liquidation). As if they hadn’t had problems enough in Bristol.

Posted in: Assured Shorthold tenancy | Housing law - All | Licences and occupiers | Regulation and planning
Giles Peaker is a solicitor and partner in the Housing and Public Law team at Anthony Gold Solicitors in South London. You can find him on Linkedin and on Twitter. Known as NL round these parts.
← Northern Waters The Tribunal's enforcer →