No, I am not going to comment much on the ongoing, unravelling farce of the NHF ‘voluntary deal’ on housing association right to buy. Partly because nobody seems to have a clue what is going on and what it would actually mean – apparently including the NHF. But there is plenty else going on to suggest that the opening of the seven seals is now well underway for UK housing.

A ‘furnished houseshare room let’ in Clapham for £500 per month 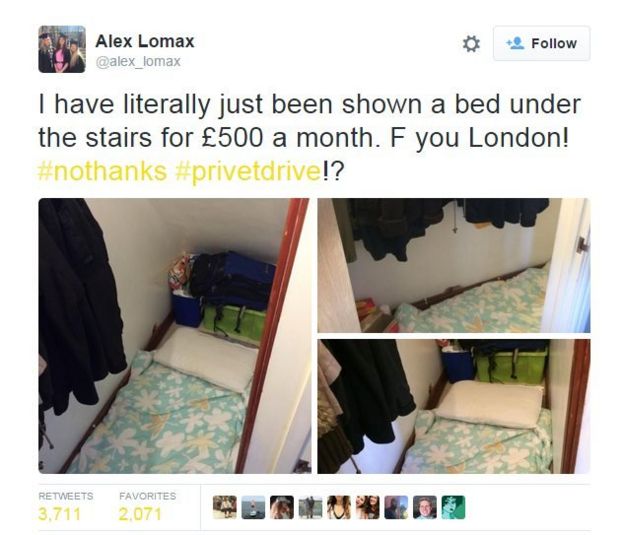 I wonder if Wandsworth Council might want to look at fire safety… According to the Daily Mail, the landlord is called Dan Smith.

[Update – this may be a PR scam, building media links for a letting site. But we have seen sheds in living rooms genuinely offered for let.]

London Local Authorities are considering a legal challenge to plans to make them sell off ‘high value’ council housing to fund the ‘voluntary’ housing association right to buy. (Subscription needed for link). Because, of course, the NHF plan, while allegedly saving housing associations from, erm, something though it is far from clear what, does thoroughly involve doing over any local authority sitting on housing stock in high market value areas (like all of London).

Underlying this tragic story is a perhaps more everyday story of the operation of homelessness services.

Putting together various bits of the story from various pieces, it appears that the young couple lived in a flat near Bournemouth after the woman had fled her home in Kent because of DV. They lost the flat and the woman, now pregnant, approached Poole Borough Council in May. The woman’s partner was from Bournemouth.

According to Poole’s quoted remarks, the woman was told she could not be helped because she lived in Verwood (outside Poole BC boundary), and Poole are also reported as saying they would have advised her to “contact her local council who may be able to review her application and offer assistance based on her current circumstances” and that

“Borough of Poole was contacted by the mother and though she was not eligible, she was provided with as much support and guidance as possible.”

The couple became actually homeless after the premature birth of their baby, staying in B&Bs and sleeping in their car. It appears that after July they went to Kent and that their baby sadly died soon after.

What struck me here was Poole refusing to take a homeless application from a pregnant woman, saying variously ‘not eligible’ and ‘living in a different council area’. So I had a look at Poole’s homeless services page. Rather surprisingly, this said that 5 conditions had to be met for housing assistance under homeless legislation:

And here is the ‘Dorset Councils’ website on homelessness. Which is differently but equally misleading.

Now, the emphasis on local connection as a criteria for housing assistance is, to put it at its best, an error. Local connection is an issue for a potential referral to another borough, but it is a factor after a homeless application has been taken and a s.184 decision reached as to a housing duty. It is not and cannot be a reason to refuse to take an application (and provide interim accommodation if apparently homeless and in priority need).

So I emailed Poole to ask i) on what basis they had decided this woman was ‘not eligible’, and ii) on what statute and case law they based their assertion on their webpage that ‘local connection’ was a condition for housing assistance (making clear it was for publication).

I actually got a reply.

1.We are unable to comment on individual cases without consent and as you know under the Data Protection Act , we are not able to disclose individual information .

2. Thank you for your observation on the content on our web page, this information is currently been amended and updated version will be posted shortly.

Well the DPA certainly didn’t stop them providing quotes for the various newspaper articles, and I had not asked for any personal or identifying details. But they had indeed amended the web page, which has become startlingly brief, omitting any mention of local connection, or indeed virtually anything.

What I am left with is the very, very strong suspicion that Poole BC had been gatekeeping, using ‘local connection’ as a means of (unlawfully) avoiding taking homeless applications. Let us hope that being called out on it changes any such practice that might have been taking place.

This evening’s news is that the committal proceedings did not go well:

On a much happier note, it is the 30th anniversary of ‘Recent Developments in Housing Law’ in Legal Action magazine. Run by Jan Luba QC and HHJ Nic Madge, Recent Developments has been at the very core of housing law practice for all of those 30 years and is a remarkable feat of building a whole area of law. Let us hope for many more years.

Posted in: Assured Shorthold tenancy | Homeless | Housing law - All | right-to-buy
Giles Peaker is a solicitor and partner in the Housing and Public Law team at Anthony Gold Solicitors in South London. You can find him on Linkedin and on Twitter. Known as NL round these parts.
← Putting section 21 right - again. Bedroom tax and landlord's bedroom count - UT again →