Blow the rent, have another egg nog

Hammersmith & Fulham Council have come up with a novel way of angering their tenants.

Faced with a substantial rent arrears problem, with a reported 46% of tenants in arrears (what with the bedroom tax, the end of council tax benefit and all), H&F decided to send out a Christmas card to tenants. 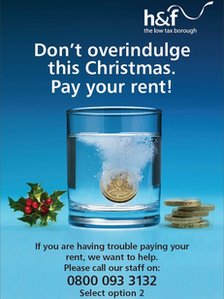 Here it is, in all its festive glory. The message is that H&F tenants are exactly the short of people who would blow all their money on over-indulging, thoughtlessly and casually neglecting to pay the rent. This might be thought bad enough, when being sent out to people who are quite possibly struggling to get by week to week at the best of times.

However, H&F managed to make it worse. It didn’t just send the card to people who were actually in arrears. It sent it out willy-nilly. Thus, entirely predictably, causing a high degree of outrage from tenants who had never been in arrears, and who weren’t planning on blowing the rent money on that extra case of Baileys and a mountain of pigs in blankets.

Top work, H&F and Councillor Johnson, cabinet member for housing. Councillor Johnson seemed surprised that the ‘hard hitting’ card might be thought insulting. Such a remarkable lack of imagination is worrying in a consultant.

[Derwent Living in Derby took a similar approach, though at least without accusing their tenants of over-indulging. ]

Posted in: Housing law - All | secure-tenancy
Giles Peaker is a solicitor and partner in the Housing and Public Law team at Anthony Gold Solicitors in South London. You can find him on Linkedin and on Twitter. Known as NL round these parts.
← Don't Think Twice, It's All Right (To Manage) Out of order →